MOVING ON AFTER THE FIVE YEAR PLAN

From Retirement to KENTUCK Festival of Arts
It's hard to believe my last post was in 2016 when I wrote about my 5 year plan towards  becoming an artist. Most of 2017 was spent moving "stuff" from Virginia to my newly purchased retirement home in North Carolina. Then all of 2018 was spent as an official retiree working on retirement issues, which included the actual move to NC, unpacking, remodeling, making some great new friends and reconnecting with other friends and family.

Along the way I did attend a few Fine Art Shows, made some new art and getting some much needed rest.
In 2017 I attended the Frederick, MD FINE ART FAIR and the Howard Alan July 4th ASHEVILLE PACK SQUARE. Both were very good events.

But 2018 brought an exciting new opportunity when I was juried into the KENTUCK Festival of the Arts in Tuscaloosa, Alabama.

The Kentuck Festival of the Arts is recognized by the Alabama Dept of Tourism as a top-ten event in Alabama and by Alabama Magazine as a “Best of Bama” event.

Kentuck has been featured in Smithsonian, Southern Living, American Style, and National Geographic Traveler magazines. In 2018, it was named 5th in the nation by Sunshine Artists Magazine its Category.

The show was exciting for me because it gave me a chance
to visit with family members Walt and Alison White who lived close by.

And it also gave me an exciting boost of artistic confidence. Kentuck has a wonderful Award of Merit Program which gives artist cash awards based on a review by a Professional Panel.

And I received the Award of Merit for the FIBER Category!!! 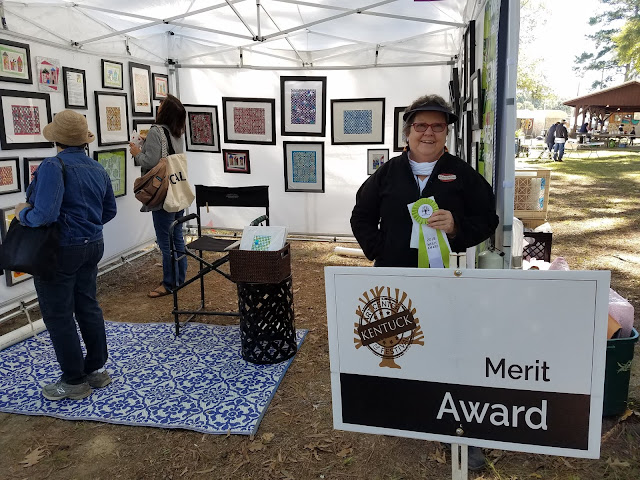 FALL FESTIVAL OF ARTS - ASHEVILLE, NC
To wrap up 2018 I participated in the Hot Works Fall Art Festival in downtown Ashville during the last weekend of October. The weather was a bit cold and damp on Saturday. But the sky cleared Sunday and the crowd was strong for this promoters first event in Asheville.

Cut Sew Create Studio
Hendersonville, NC, United States
Welcome, I'm a FIBER ARTIST with a personal goal to inspire others to become environmental activists. I do this by creating art from RECYCLED SODA CANS which I hand weave with fabric or paper before I quilt it on my home sewing machine. I started my artful path as a traditional quilt maker. Later I moved on to art quilts and now framed art. I also make 3D Mixed Media pieces from found vintage pieces and I enjoy thread painting some of my woven pieces. On a personal note, I'm originally from West Va where I attended Marshall and later I graduated from University of Tenn Chattanooga. And for a while I rode a Harley Dyna, which I traded in for a much larger Bernina sewing machine that's a lot safer.